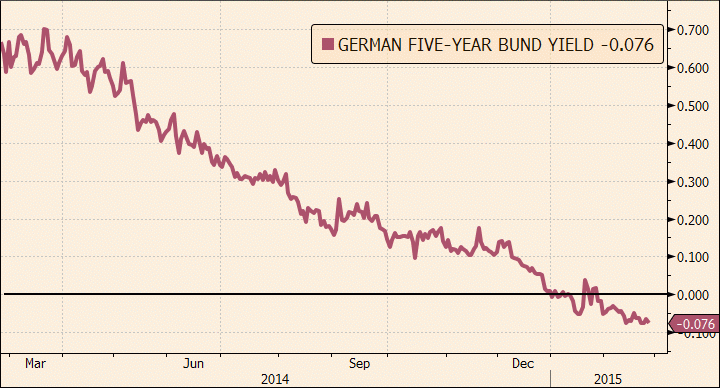 I don’t often talk macro, but when I do, it’s on the Internet. A friend asked me,

Why would someone invest in a negative yielding bond over simply stashing the same money under a mattress?

This was around the time the bund went went negative at the end of February. See the chart above. And it’s a good question. Let’s start with the counterexample. And just to simplify things, let’s assume zero risk.1

In the opposite case, if the yield on the overall market has gone up, then the fixed interest rate is worth less versus the rest of the market and it will trade at a discount to the stated rate. But the German case is severe. In this instance, the rate on the bund is so low, it’s actual return has gone negative. This is a more severe case of the same phenomenon. The Financial Times called it due to concerns about deflation. The rising value of the money, versus the overall economy, is expected to compensate for the nominal loss in interest.

But why not stuff the money under the mattress, after all? That’s more nuanced. Why don’t people put money under the mattress in normal times? Banks charge fees to maintain accounts and that is an effectively negative yield. A few things come into play. But the most important is you pay for safety. The government felt safer than the mattress. A burglar can’t break into your house and take your bonds (they are electronically transferred). But a burglar can take the contents of your house. This safety is a critical point as the electronic reference is easier to carry and point around than a wheelbarrow full of cash. Finally, having the money in the system means it is easy to spend when it is needed. Bonds can be sold quickly and the proceeds dropped into accounts for spending.

Forbes has a great discussion of the implications of all this.

Image by The Financial Times.