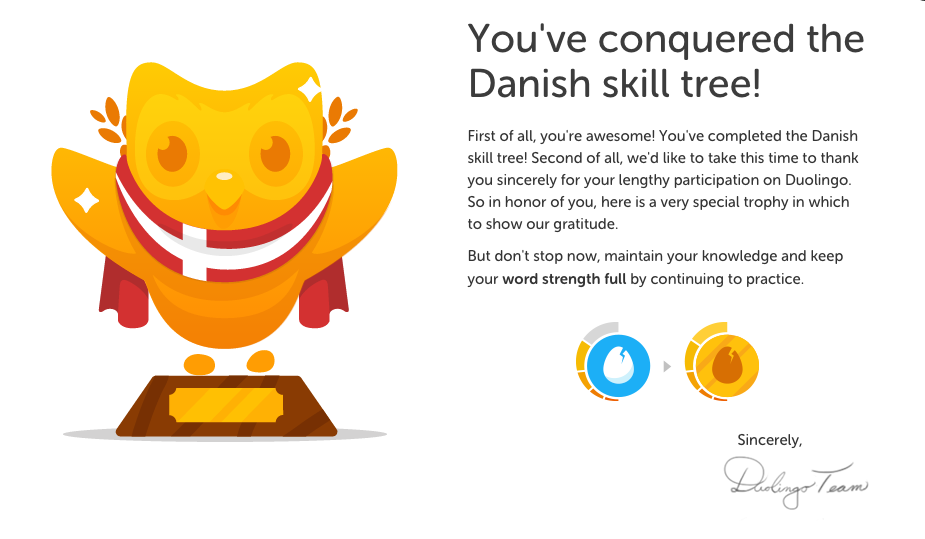 After just over five months of study, I have completed the Danish Duolingo course. I had played with Duolingo before, but in December the Danish course was added to the Android app, and I started. There are more than 70 skills with 350-450 some lessons to learn. I usually accomplished this by doing 3-4 per day on the train ride home. My streak (consecutive days meeting the target studying) is 151. Let’s assume the first dozen or so were actually spent playing with German. So that’s like 140-odd hours of study.

We had just booked a family vacation to Iceland. Seeing that Icelandic was not available through Duolingo, Danish made some sense. First, Danish is compulsory for Icelandic students (as is English). Further, Icelandic and Danish are fairly closely related, so I thought it might help. This turned out well, since road signs and menus in Icelandic were fairly intelligible after completing, roughly, two-thirds of the Danish Duolingo course in three months. Norwegian Bokmål might have made more sense, but the course was not yet available. (It was released about a week ago, though.)

At this point, it’s difficult to say how much I know. I do not feel comfortable speaking. However, I had the same problem taking Spanish in school. Listening is difficult, but I attribute that to some wierd pronounciation rules in Danish. But reading and writing I feel okay with. For instance, I searched for some term a couple of weeks ago and found it in Den Danske Ordbog, and had no trouble reading the defininition in Danish. And that was cool.

The biggest hangup is that I am bad at vocabulary. Very bad. So I find I need the dictionary at my side, often. There’s a Memrise flashcard deck keyed to the Duolingo vocabulary introduction. It has helped, but I tend to focus on moving forward in Duolingo rather than picking up Memrise review. I should probably do that now.

I have a Danish language resources page I created with study and media suitable for Duolingo learners. It has helped me, though I won’t assure anyone else of its help.