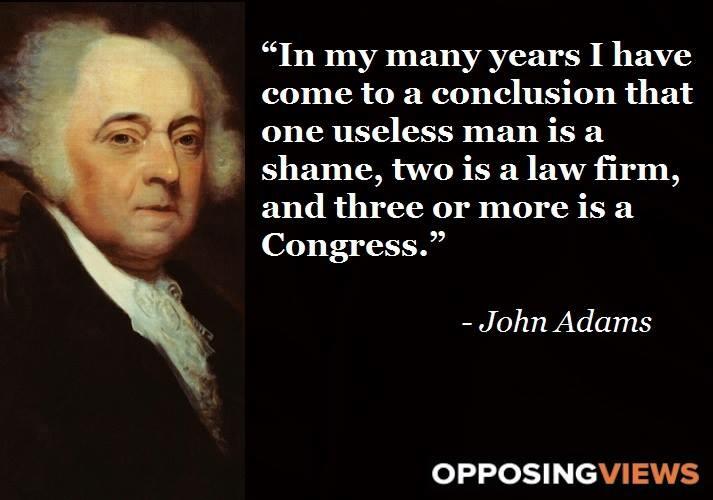 One useless man posts on Facebook, two respond to it, and three or more become a flamewar

Facebook arguments are a great source of blogging material, so here we go. This weekend, someone posted the picture above showing a quote attributed to John Adams:

In my many years I have come to a conclusion that one useless man is a shame, two is a law firm, and three or more is a congress.

John Adams never said this. The confusion though is genuine. The line was written by Peter Stone for the character of John Adams in the 1969 musical, 1776. And the mythology surrounding it is great. Everyone thinks Adams wrote this:

This last one is interesting because even a cursory glance would make clear the John Adams Historical Society is not particularly academic in nature and has, at least, one other quote misattributed:

There are two types of education… One should teach us how to make a living, and the other how to live.

That belongs to James Truslow Adams.

But even a little critical thinking about the Adams quote would show it couldn’t be from Adams. First, whenever it’s quoted, there’s no origin given. A good quote, if actually from someone famous, would include at least a date and some other context for its origin. Adams was a prolific letter writer, with Abigail Adams and Thomas Jefferson as regular correspondents. Many quotes will cite if in a letter the recipient. None is ever given. In case you’re curious, in the musical, it’s part of the spoken-word lead-in to “Sit Down, John.” Here’s William Daniels doing it.

But that’s just the clue something is wrong. The dead giveaway this never happened is in the words “law firm.” I can look out the window and the words “law firm” are written on the nearest wall. But the concept is relatively recent. As this blog post points out, Adams died on July 4, 1826, but “law firms” are a 20th century concept. Sure, groups of two or more lawyers were forming partnerships before then, but the idea of a “law firm” is relatively recent. Even word “firm” to describe a business of any kind is on shaky ground, imported from Italian into English in the late 1700s. It’s possible Adams could have used it, but let’s just science the shit out of this.

Google, recorder of pretty much all human knowledge, let’s you use the “n-gram” viewer to graph the occurrence of words and phrases over time. Here’s the graph for “law firm:”

Prior to 1854ish, there is no use of “law firm” as a nounal phrase. There are a bunch of appearances of the phrase, such as the question “Is the law firm?” asking if there were any wiggle room, and descriptions of the “law, firm” showing there is no wiggle room. And a great many optical scanning errors turning “law term” into “law firm” in dictionaries. But to get to a law firm as a group of two or more people, that takes until almost 30 years after Adams’s death.

It’s pretty clear, Adams never gave the quote. He also probably never said anything like it.

Image stolen from someone’s Facebook page, but it claims to be from OpposingViews.