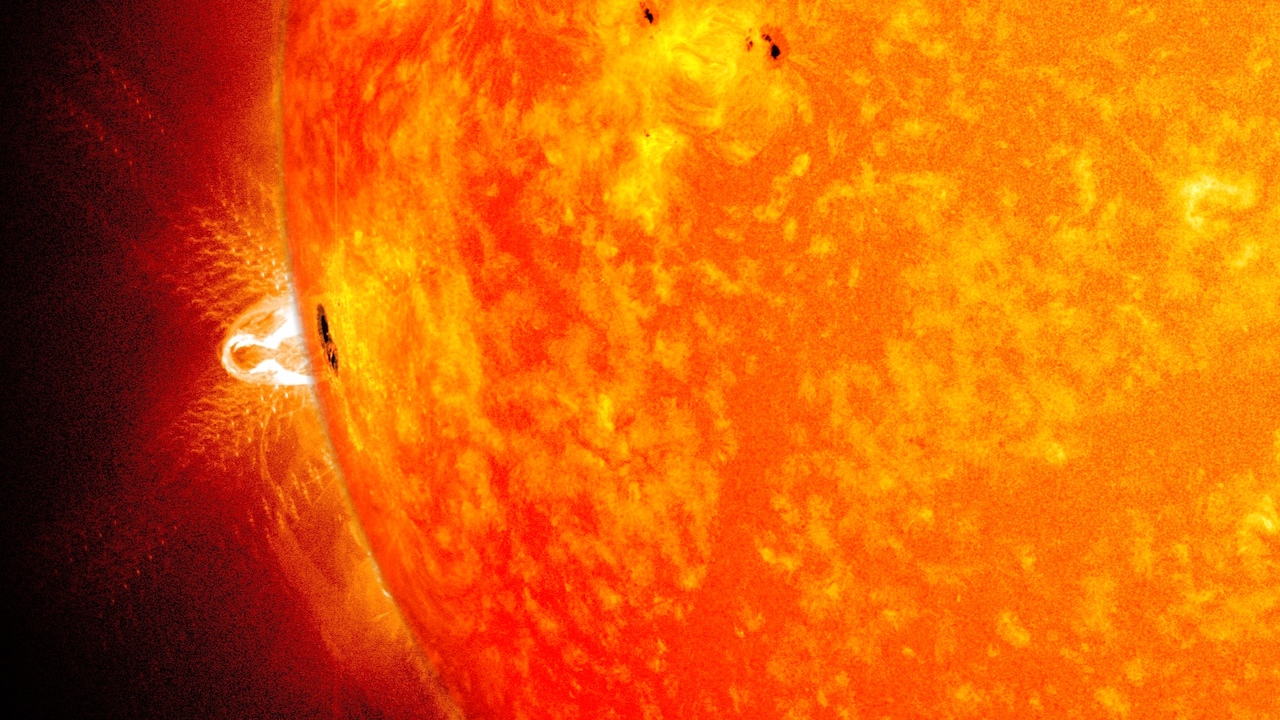 Sunspots Will Not Cause an Ice Age

I grew up in this small town in Ohio called Hamilton. I’ve talked about it here, before. I’ll let you draw your own conclusions. The Journal-News is the local daily newspaper, something we don’t see a lot of here in Maryland. But it is pretty common when you head further west and the kinds of comments on the newspapers’ websites are from people who couldn’t cut it as Yahoo! commenters.

Last week the paper ran a story on climate change:

Read more trending news In addition to gutting regulations on oil, coal and gas emissions over the past two years, Trump moved to pull the U.S. out of the Paris Climate Agreement and even said outright that he didn't believe the conclusions of a major report on the critical consequences of climate change issued Friday by 13 government agencies from his own administration.

Needless to say, the comments on Facebook were a hotbed of intellectual achievement. One of the most amusing comments went like this:

Recent evidence based studies also suggest we are about to experience a mini ice age due to sun spot activity.

So, that’s the level of scientific ignorance out there. But let’s talk about it anyway! A few things to observe here. First of all, let’s take a look at the global temperature anomaly. As we can see from the plot below (data from NOAA), the mean global temperature is increasing.

And it is increasing due to the greenhouse effect. I used 1979 as the starting year since that is the year I was born. Conveniently, 1979 was the peak of Solar Cycle 21 and we are expected to be starting Solar Cycle 25 right now. So we’ve seen 3 complete solar cycles since 1979 and we take an initial look at the mean daily sunspot count per year, to see where they are going (data from SILSO).

As we can see, sunspot activity is highly cyclical and there’s no similar cyclical pattern to the global temperature anomaly. And it is not hard to see why. We can use the Stefan-Boltzmann law to understand how much the Sun heats the Earth.

giving the effective blackbody temperature of the Earth where [latex] \sigma[/latex] is the Stefan-Boltzmann constant ([latex]5.67\times 10^{-8} W/m^2-K^4[/latex]), [latex]\alpha[/latex] is the Earth’s mean albedo (0.31), and [latex]S[/latex] is the solar constant, how much energy is received from the Sun ([latex]1370 W/m^2[/latex]). You do the math and this turns out to be 254.087°K or about -19°C. That’s a bit cold, even for me. The earth is generally much warmer than this because of the greenhouse effect. The baseline temperature of the Earth, the zero of the first plot above, is 288°K. So there’s an expected greenhouse effect of 34°C. The anomaly is lifting us above that.

We know there’s a peak-to-peak variance, during the solar cycle, of 0.1%. That means [latex]S[/latex] will vary from 1368.63 to 1371.37 [latex]W/m^2[/latex]. Now, there’s some variation in the estimate of total solar power, and those are dependent on where you measure. It doesn’t really matter since [latex]1370 W/m^2[/latex] is the theoretical amount and we are trying to find the theoretical change in global temperature due to the solar cycle. Plugging these values into the Stefan-Boltzmann law, we find that the blackbody temperature range of Earth is 254.023°K at the low end and 254.150°K at the high end. That’s a difference of 0.127°C. That’s really the total spread we can expect in global temperature changes due to the solar cycle. And the difference between the mean and the high is 0.063°C. This is the theoretical maximum. Any real difference is going to be smaller.

In 2017, which was far from the solar maximum, but we will just pretend it was the worst, the global temperature anomaly was 0.85°C and there’s 0.787°C of heating that solar cycles just don’t account for. And the idea that an ice age will be caused by a 0.063°C difference is laughable when you realize the temperature during the last ice age was at least 4°C below the global baseline temperature above.

So, no. The solar cycle will not change the overall trend and it certainly will not cause an ice age.