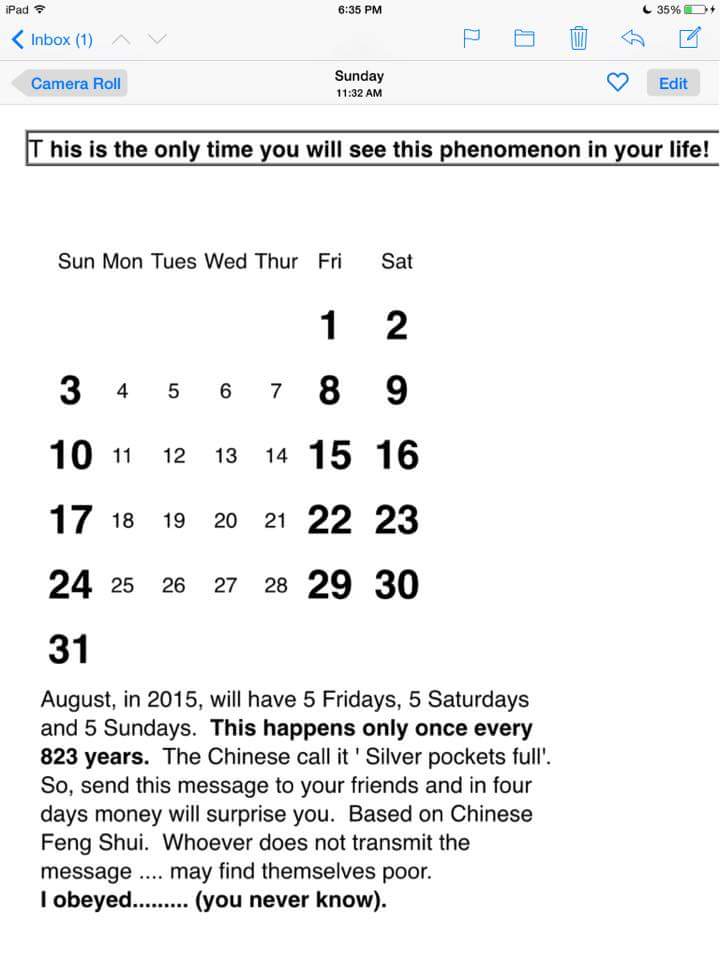 Odder than a Month of Sundays

On Monday night, I saw this math myth on “Pockets Full of Silver” showing that this August is special in that it has 5 Fridays, 5 Saturdays, and 5 Sundays, a phenomenon that occurs once every 823 years.

It must be very rare, because that’s August 2014, not 2015. And such events are not rare at all. There are 14 different weekday configurations for a year, which we can deduce from simple combinatorics. First, there are seven days of the week and the year may start on any of the seven. Second, there are two different options for the number of days in a year, as every fourth year is a leap year. Two times seven is 14. But the cycle is stepped through kind of haphazardly before repeating because seven and four are relatively prime.1

But there are only 14 possible weekday configurations. And the current configuration will generally repeat in six or 11 years, depending on where in the cycle you are. Leap year configurations are a bit rarer. And their relative frequency gets tossed about by the century leap year rule. The calendar for 2014, showing August starting on a Friday with five Fridays, Saturdays, and Sundays, last occurred in 2003 and will next occur in 2025. It’s less frequent than every couple of years, but it is also not a “once in a lifetime event” and will certainly happen many more times before another 823 years pass.

As an aside, we can use the limited number of calendar configurations to determine something else. Mathematicians call this proof by exhaustion since we evaluate all possible options before reaching a decision. There is a minimum of one Friday the 13th every year, but never more than three.

It should come as no surprise, I also saw this on the same person’s feed.