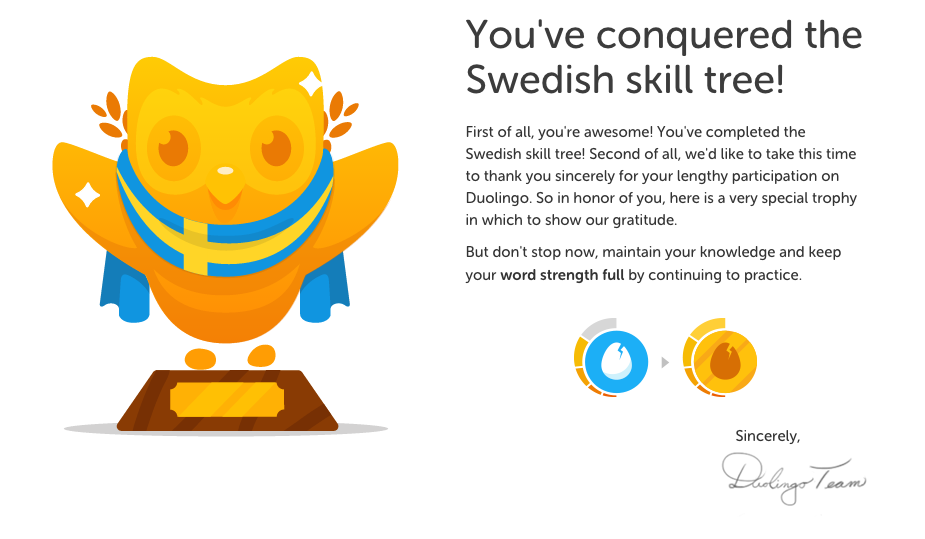 I had an unusually long train ride this evening, and I finished the last eleven lessons in the Swedish tree on Duolingo. Regular readers may recall I completed the Danish tree about five months ago, and like Swedish, that took about five months.

I am not sure much why I moved on to Swedish after completing Danish, though I do have a handful of notes for anyone interested. First, I felt like the first dozen or so skillsets went by remarkably quickly. Swedish and Danish are very closely related languages and it is hard to not get the impression from Danish that you have a head start on Swedish. Further, this similarity holds all the way through the language and may be some what detrimental, in the end. The overlap is both reassuring and not. Second, somehow, after completing both, I have around 800 fewer experience points in Swedish than in Danish. I do not know what this means. Third, somehow, I feel more confident in my Danish skills than my Swedish skills. I feel that, despite the fact I spent roughly the same amount of time on each, I took Danish more seriously. This may be a problem of familiarity, though, now.

I have maintained a 288-day streak on Duolingo. I am not sure what language, if any, I would take on next. Russian is scheduled to be released soon, and that would extend the Arctic languages trend I have here (give us Finnish and Icelandic!). Otherwise, I will probably work a bit on both the Swedish and Danish trees to maintain the streak, but try to take it easy for a while.