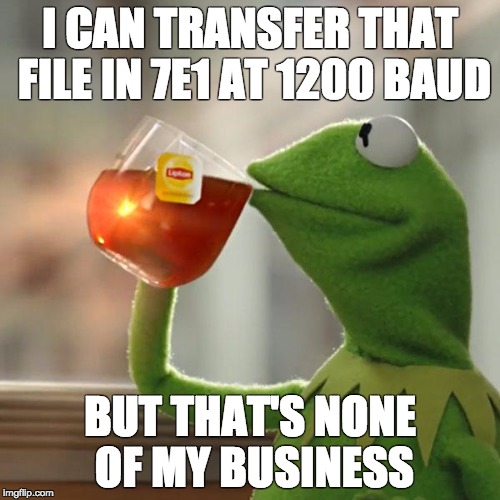 A Love Note to Kermit

Occasionally, I post some pictures and notes on hardware projects we have going on in the Cybernetics Laboratory, which is to say, my desk. One thing that always comes up a program called Kermit, originally built by Columbia University, now maintained by the Kermit Project. Kermit has been around since the early 1980s, but I learned of it in the early 1990s from BBSes. I would download stuff using XMODEM, but some BBS systems would offer Kermit as a file transfer protocol.

I would learn a lot more about Kermit in the mid 1990s. My mother started a postgraduate program at Miami University in the fall of 1995 and the University’s technology office would give you a disk with Kermit for DOS on it. Kermit is super configurable and scriptable. So they set it up with a menu that would connect to different systems at Miami. I would use it to dial in to the library’s catalog. The catalog didn’t require a password and provided Lynx. It wasn’t locked down, so I could hopscotch around the Internet from there.

Later, when I went to in Wavix in 2002, I installed Kermit on my desktop to talk to the router we were building. I also installed it on the router itself. It just made life easier to have Kermit on it.

Now, playing with hardware like the Raspberry Pi, Intel Galileo, and even Arduino, my primary interface is Kermit. And I install Kermit on the board if it supports it. It’s easier than getting scp up and running.

I am not the only one who thinks so. Apparently, Kermit is still the communications tool of choice for certain classes of medical records and inside ATMs. Those are two worlds where things don’t move fast. But the fact Kermit is still a go-to tool for embedded development tells me it will be there for a while longer.

Apparently, the Kermit Project found a copy of the first portable Kermit version from 1985. They also got it working under Solaris 9. Given this supported systems list:

I am half tempted to install 4.2BSD on a VAX just to watch it go.