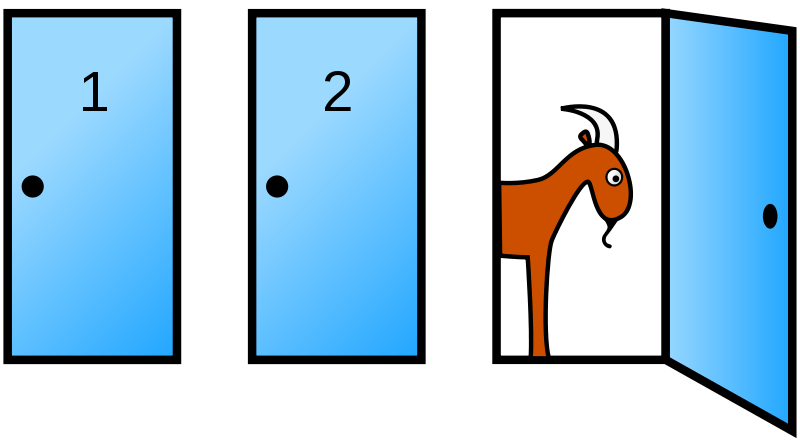 Perhaps the less said about the Monty Hall Problem, the better, as many barrels of ink have been spilt in debate over the correct solution. The Monty Hall Problem is a standard problem from statistics to show the different results between statistical reasoning and intuitive responses. Due to the different results, the problem is occasionally called the Monty Hall dilemma or the Monty Hall paradox, though it is neither a dilemma nor a paradox. The problem comes from an old game show called Let’s Make a Deal and the standard form of the problem was given by Craig Whitaker in a question to Marylin vos Savant’s Ask Marylin column:

Suppose you’re on a game show, and you’re given the choice of three doors: Behind one door is a car; behind the others, goats. You pick a door, say No. 1, and the host, who knows what’s behind the doors, opens another door, say No. 3, which has a goat. He then says to you, “Do you want to pick door No. 2?” Is it to your advantage to switch your choice?

There are two doors you did not choose, and the probability that the prize is behind one of them is 2/3. I’ll help you by using my knowledge of where the prize is to open one of those two doors to show you that it does not hide the prize. You can now take advantage of this additional information. Your choice of door A has a chance of 1 in 3 of being the winner. I have not changed that. But by eliminating door C, I have shown you that the probability that door B hides the prize is 2 in 3.

The contestant would be wise to take advantage of this information. Therefore, it is always advantageous to switch and the switching player will win two out of every three tries. In practice, a player only gets one shot at the game, but that is beyond the scope of the problem.

Vos Savant published the question and result in her column in Parade magazine, a weekly newspaper magazine published in newspapers around the country. The result caused an uproar as mathematicians, statisticians, and everyone else wrote in to claim there is no advantage is switching results. However, vos Savant was correct in her original analysis, a result that can be verified trivially with Monte Carlo simulation or proof by exhaustion, as vos Savant did it, as there are only 18 cases.

However, the problem, rightly, challenges our ability to think critically, illustrates our inability to assess risk and conditional probabilities using intuitive thinking. The problem has been studied extensively in experimental psychology in an attempt to understand why. The results suggest that better statistical training and less focus on Bayesian results in better play among novice players. However, when variants of the problem present more door options to the contestant, they have a tendency to amortize the probability of a prize across all remaining doors, rather than correctly assessing the probability for the door selected and alternatives.

Accordingly, the difficulty in assessing the problem and the training required to come to the correct conclusion stress the difficulty in both causal reasoning and risk assessment. In addition, the impact assessment for each option is also rarely taken into account.