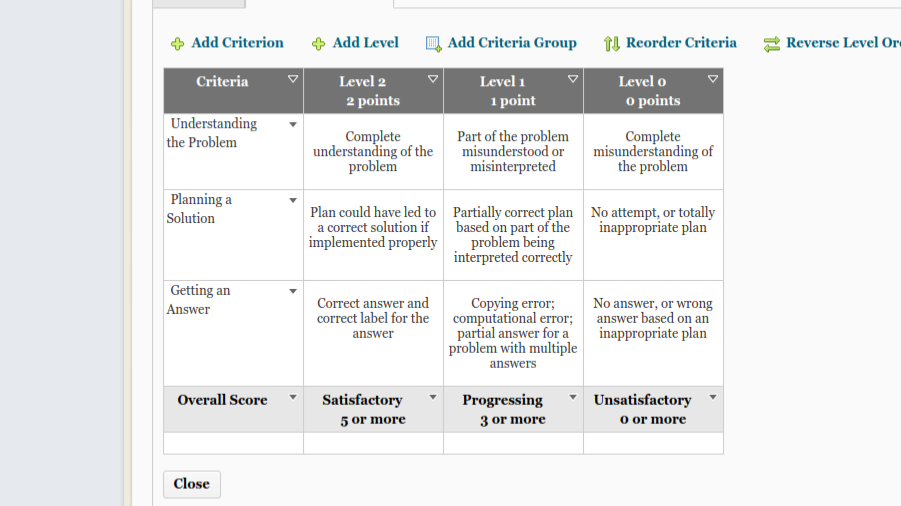 Two years after I wrote my big grading rubric in our Desire2Learn platform, it has become increasingly clear it is insufficient for effective grading. That’s not to say it is bad, but it is both too complicated and too simple to work. The biggest problem with it is that it is too subjective. The default comments do not align with actual issues, often, and the whole thing just needs updated.

I was recently talking to a former high school math teacher and he told me about his old grading rubic. It’s far simpler, but it directly and objectively quantifies the three critical parts of solving a math problem:

So the new rubric, for every problem, delivers up to six points, two for each of the three parts. This also solves a long-standing problem I have had with the old rubric. There is no reasonable way to grade a problem where the student has written down the correct answer, and nothing else. Now, that’s worth an explicit point. The three facets are graded in parallel, rather than in serial. It’s more flexible, and it should allow me to grade more effectively.

The exact implementation of the rubric comes from How to Evaluate Progress in Problem Solving, by By Randall Charles, Frank Lester, and Phares O’Daffer. I have two precalculus courses this fall. The first is wrapping up in two weeks, and uses the 2014 grading rubric. The second starts in three weeks, and I will pilot the new rubric there.