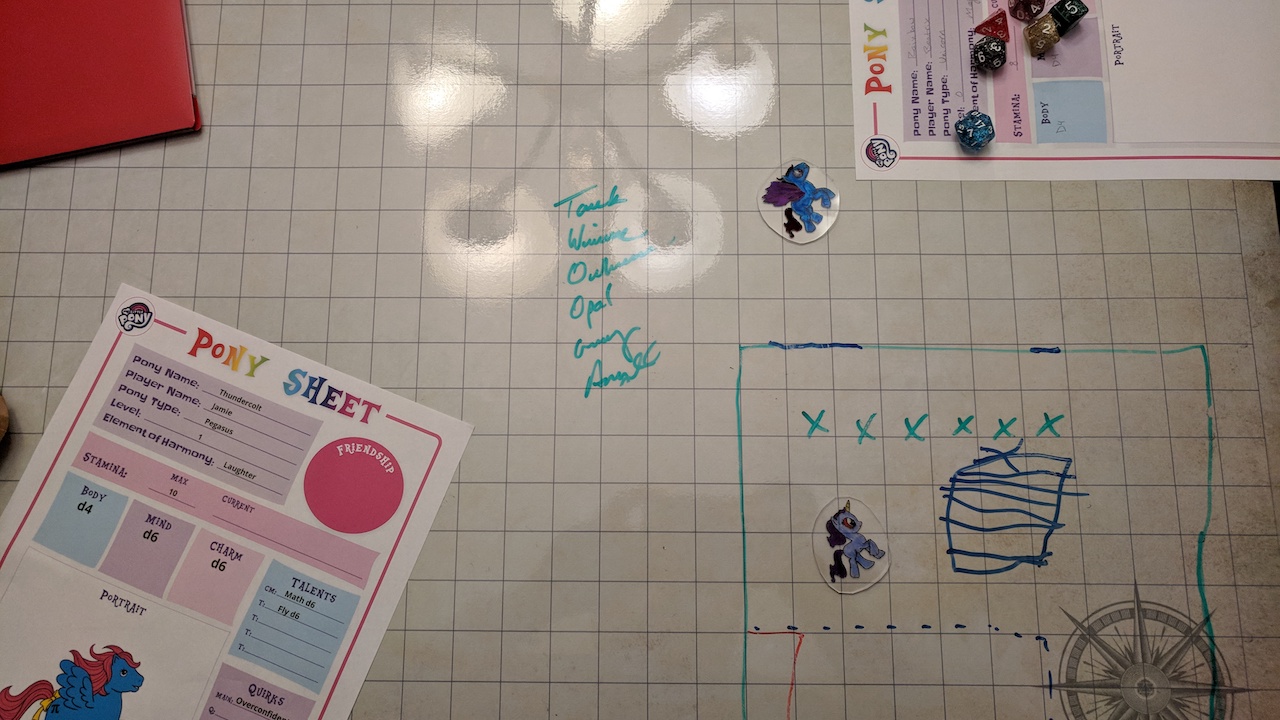 Shrinky Dinks for Custom Tokens, or How I Learned to Stop Worrying and Love My Little Pony

Several months back, Chase and I were at a Pokémon TCG prerelease. I do not recall which prerelease it was, but it was at Alternate Worlds way out in Cockeysville. While there, Chase saw a Star Wars book and asked me about it. See, the only thing he loves more than Pokémon is Star Wars. And this had his attention. It was a book from the Fantasy Flight Games Star Wars Roleplaying game series.

So, growing up, I always heard that roleplaying games, i.e., Dungeons and Dragons, were, well, you know what it’s like in the Midwest. Obviously, I got better, but I never played anyway. So this wasn’t my bag at all. But I did know who to ask. I posed the question to someone Nina went to school with who gave me some solid suggestions and good ideas on first, learning myself, and second, working with the kids.

The bad news is that it has only been hit-or-miss with Chase. I am hoping the simpler basis for the Star Wars game from West End Games, being reprinted this month, may make it a lot simpler. The Fantasy Flight Game is just way too complicated for an eight-year-old.

Now, Ducky, on the other hand, has jumped right in. I had a couple of good suggestions from Facebook, including Little Wizards and No Thank You, Evil. We tried Little Wizards and she liked it, but it didn’t really capture her imagination. But My Little Pony: Tails of Equestria was right up her alley. Already well-versed in the Ponyverse, she was quite happy with this. I am, perhaps regretfully, not a Brony, but Ducky has been quite patient in teaching me what I need to know.

This all leads to a problem we had. See, we’ve been playing and using various things on a hand-drawn map to represent our ponies. I decided this wouldn’t do. Now, I could have purchased some My Little Pony figures and been done with it. But, you see, our ponies were the ones Ducky and I created. (Since, I know you want to know, mine is a blue Pegasus named Thundercolt. His cutie mark is a π (pi).)

So I got on Amazon and found some Shrinky Dinks. These are plain clear sheets with no image on them. I overlayed them on top of some line-art provided with the Tails of Equestria and traced out images for both a Unicorn and a Pegasus pony.

After coloring these guys in with colored Sharpies, I cut them down to circles and we tossed them in the oven for three minutes. The blue dots on the sides are bits of sticky tack I used for holding the plastic sheets still while tracing the underlying image. Also, note, there’s no mane or tail in those traced images. I lifted those from some line art I used when I created the original Thundercolt ponysheet (visible in the cover image).

And look how amazing these turned out.

Ducky and I even got to use them for a session tonight!

Now, Chase has asked if he can make an X-wing.