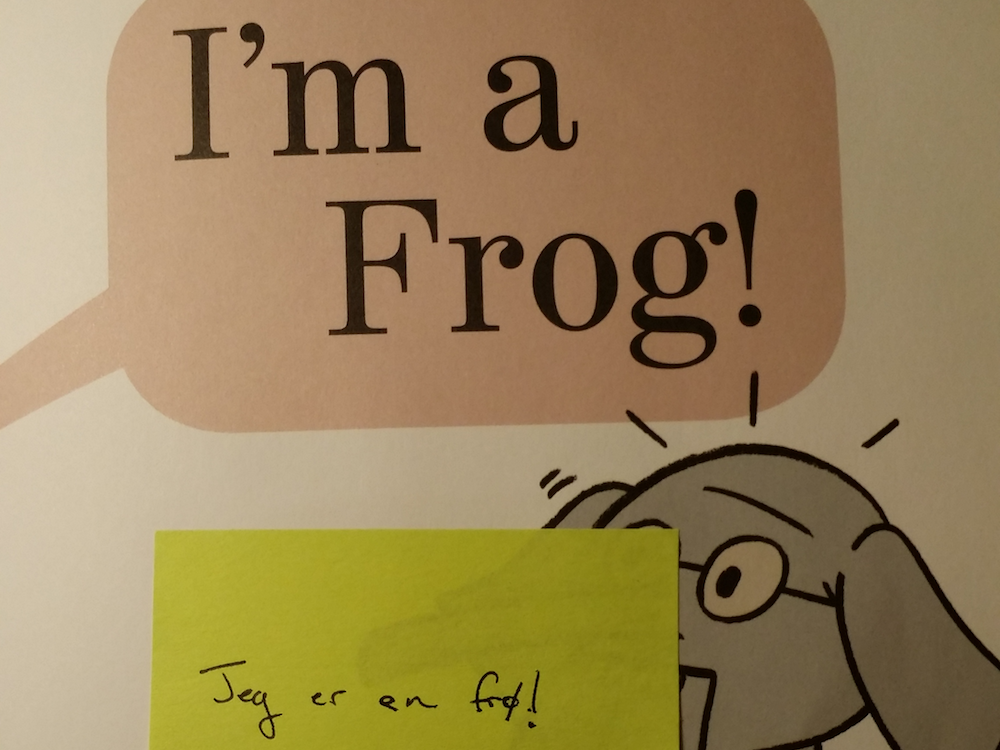 After completing the Danish course last May, I was kind of at a loss for how to proceed. Duolingo rewards daily usage, so I did the completely rational thing and went all the way through Swedish, completing it in October. Since October, I have played in French and Russian, and also worked through some older lessons to keep both the Danish and the Swedish fresh.

During the Danish course, I wanted more solid practice. Duolingo provides digital immersion for some of its courses, but not the less common languages. I wanted to practice reading. When I took languages in school, the reading material was always fairly advanced. I wanted to read something comparable to what my children read, when they are still learning English. I wanted a children’s book in Danish, but I couldn’t find any on Amazon.

But this language thing works both ways. So I picked up one of the kid’s books and started translating it into Danish. Both Chase and Ducky are huge fans of Mo Willems, as are their parents. Willems’s writing, especially the Elephant and Piggie series, are just delightful and fun to read. One of our favorites, I’m a Frog!, is especially fun, so I bought an extra copy and some stickies.

After a couple of days, Jeg Er En Frø was born. I did about half the book, but let it slide until this week. I finished it over the last few nights. There were two interesting challenges.

First, Piggie is pretending to be a frog so she ribbits, a lot, and I had no idea how to address this. I eventually found a page on Wikipedia on cross-linguistic onomatopoeias. The page lists, among other things, animal sounds in numerous languages. Frogs, in Danish, make a couple of different sounds, but I quickly settled on kvæk, which entirely the right tone.

The other difficulty was naming Piggie. Piggie, in English, is not a name per se, but really means “little pig.” Linguistically, we call this a diminutive, and is often a term of endearment. After some research, I learned that Danish often uses a suffix, -ling, to represent diminutives. This goes back to the Old Norse and through Old Norse, is not uncommon in English. I often call Ducky “the Duckling.” The Danish word for pig is gris, so Piggie’s name would be Grisling, “little pig” or possibly piglet.

I’ve finished the book without any further substantial challenges. There’s a sticky on every page and most translations have been back tested with Google Translate.